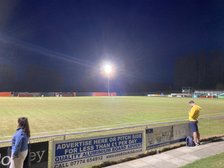 Kymani Thomas’ first half stunner was not enough as Herne Bay were beaten 2-1 by Sittingbourne in their final pre-season outing.

Thomas handed Ben Smith’s side the perfect start after only two minutes, curling the ball from 25-yards out into the top corner, before Kane Rowland levelled the score only a few minutes later.

Hassan Jalloh, Mike West, and Kieron Campbell had chances to put the visitors back in front, only for the Sittingbourne defence to keep them at bay.

Harry Harding gave the hosts the lead midway through the second period from the penalty spot, after a teammate went down on the edge of the box.

And despite a few half chances, Herne Bay were unable to further trouble the Sittingbourne back line, ending their pre-season campaign with defeat in the process.

Following Saturday’s 5-1 defeat at the hands of Ebbsfleet United, a good start was always going to be important against Sittingbourne. In the second minute, Thomas collected the ball 25-yards out from goal before curling his shot into the top right-hand corner of the net, leaving the ‘keeper with no chance.

However, the hosts soon hit back and only five minutes later, they found themselves level. Initially, Jordan Perrin had made a great close-range save to prevent a certain goal but, unfortunately, the ball fell right into the path of Rowland, who made no mistake from a few yards out.

Sittingbourne had their tails up and with 11 minutes on the clock, they had a great opportunity to take the lead when their forward was played through on goal. However, he stumbled just at the wrong moment, allowing for the Bay to recover and clear the danger.

The hosts kept pressing forward and a few moments later, only excellent defending from Troy Williams prevented the ball dribbling over the line, after a dangerous ball into the Bay box.

Following a sustained period of pressure, Ben Smith’s side warmed back into the game, testing the Sittingbourne defence in the 28th minute when Kymani looked to surge through them all, but the hosts held firm.

It seemed as though a goal for Herne Bay was just around the corner and just past the half hour mark, Jalloh almost rivalled Thomas’ effort in terms of quality. Provided too much space in which to run, Hassan took aim from 25-yards out with a thunderous effort, one which stung the fingertips of the home ‘keeper.

Zak Ansah looked in prime position to capitalise on the loose ball, but the linesman had his flag up and the hosts were let off the hook.

However, despite being put onto the back foot, Sittingbourne were still proving dangerous, with Perrin making a top save when their forward broke through on goal once again.

There is no better time to score a goal than just before the break, something which the Bay almost managed to pull off with the referee set to blow for half time. Some really impressive one-touch play almost allowed Ansah a great opportunity to, at the very least, test the ‘keeper, but a little too much weight on the final ball left the forward frustrated.

The second forty-five started at a much slower tempo, with Westy’s off target shot from a tight angle proving to be the best of the opening ten minutes.

However, moments after KC almost edged the Bay ahead, Sittingbourne were presented with a golden opportunity to score when the referee pointed to the spot in the 64th minute, after a challenge on the edge of the box.

Stepping up to take it, Harding made no mistake when thumping the ball into the bottom right-hand corner, just beyond the fingertips of Perrin.

As the game wore on, Sittingbourne looked the more likely to score again and in the 76th minute, a deep ball floated over Perrin and looked like it could sneak in, only to graze the crossbar, much to the relief of the visitors.

With time running out, the Bay were throwing what they could at the hosts, with Marcel Barrington proving to be a nuisance, but when the ball was chipped through to the big striker in the 84th minute, the ‘keeper rushed off his line well to smother the ball at his feet.

Tempers flared towards the end after two strong challenges, one on Westy and the other on a Sittingbourne player, but after the referee calmed things down, he soon brought the game to an end, condemning Herne Bay to defeat.